Your organization’s nonprofit mission is unique, but that doesn’t mean you can’t benefit from someone else’s fundraising experience. If you have never been challenged by any of the case study objectives here, it’s still possible one of them may help with your next big idea. Take a look and contact us for more!

The Greater Chicago Food Depository is a nonprofit food distribution and training center that provides food for hungry people while striving to end hunger in their community. The Food Depository makes a daily impact across Cook County with a network of 650 pantries, soup kitchens, shelters, mobile programs, children’s and older adult programs, and innovative responses that address the root causes of hunger.

All email names on file in segments based on activity including: donors, volunteers, advocates, event participants, anniversary donors, tribute donors, direct mail donors and any other valid email address captured by the organization.

This year-end fundraising campaign was developed to use all available digital channels – web, email, social media – to compel the donors and prospects to donate while making them feel appreciated for their support.

We wanted to engage the social media audience in this fundraising effort by using elements from the email campaign so overlapping audiences could note the consistent branding.

We also looked to ensure organic traffic to the website had the opportunity to immediately donate without having to navigate the new website, as the architecture had changed for a donation page.

Six fundraising emails were developed and sent prior to the December 31 deadline. These emails had a theme of community and how the Food Depository needs donor support to continue their vital work. The emails showcased a thank-you video from the Executive Director, a custom infographic to be shared on social media and personal stories from members of the community who depend on their programs. A matching gift offer was also leveraged in five of the six fundraising emails to further increase response and revenue.

Since the month of December had the highest amount of responses of the year, we took this opportunity to test several elements of the new mobile responsive donation page. After each test, we ran continuous reports and then changed the donation page in the next email accordingly so that the page was as optimized as possible. We took all the learns and applied them to the general donation page for the website for the last two days of the calendar year.

All the emails were accompanied by custom acknowledgment pages that provided the donor an opportunity to share that they just donated as well as gave them links and suggested copy. The thank you email copy referenced the campaign and directed the donor to share the infographic.

A roadblock banner was used on the homepage throughout most of the month. This pop-up would immediately ask the visitor to make a donation before browsing the rest of the organization’s site. The first banner included a photo of a member of the community being served at one of the network’s locations and in the second we used a photo of a child. The creative asked these web visitors to donate by 12/31 to help ensure that no one goes hungry in 2014.

Several Facebook and Twitter posts featuring creative elements from the email campaign were uploaded. They encouraged followers to help make a difference in the fight against hunger, where their gift could make twice the difference before December 31. 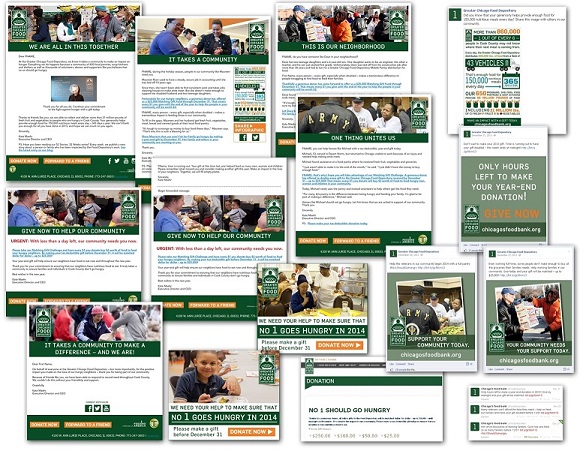 This year-end campaign with its enhanced focus on fundraising over the previous year, use of email best practices, recent testing learns, and mobile responsive emails and donation pages, resulted in an increase across the board.

As a result of these changes, the email campaign revenue increased 8% while the number of gifts increased 16% over the previous year. An additional $3000 in revenue came in from social media assets. The homepage banner creative was tested and the timeframe in use was extended which increased the revenue 98% over 2013. 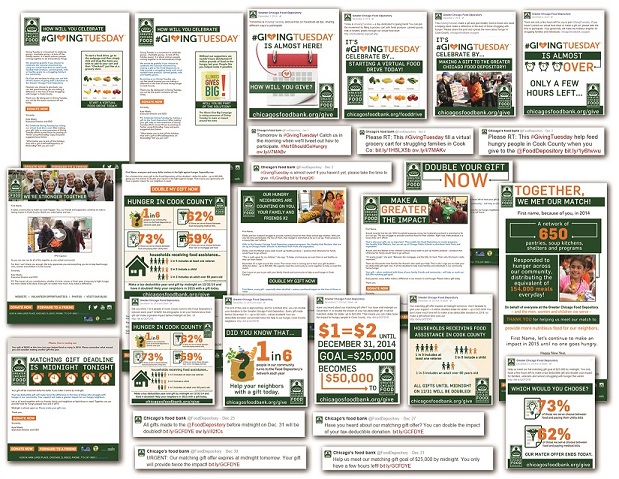 UCLA’s Jonsson Comprehensive Cancer Center (JCCC) is internationally renowned for innovative cancer research and is ranked among the top 12 cancer centers nationwide by U.S. News & World Report, a ranking it has held for 10 consecutive years.

JCCC wanted to expand their email communications program. After completing an email append to increase the number of email addresses they had on file, JCCC needed to implement a multi-channel strategy to increase year-end revenue.

The end of the year provides a unique giving opportunity where supporters can donate year-end gifts in accordance with their end of tax year write off needs.

In addition, up to fifty percent of all online fundraising nationally happens between November 1 and December 31, so it makes sense for JCCC to be aggressive about fundraising during this time.

To create a direct mail package that is engaging, has year-end messaging and provides the impetus for both current, lapsed and tribute donors to make a gift. In addition, we needed to create a series of six emails to be emailed between October 30 and December 31 that incorporated similar messaging and design. 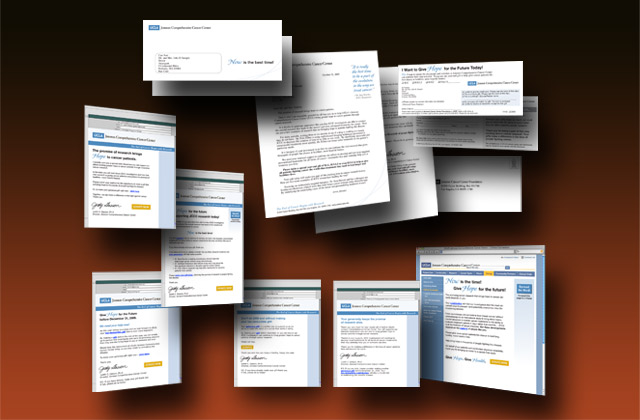 All components of the year-end campaign carried the message that, every day, the researchers and scientists at JCCC are continuing their important research into developing the newest and most advanced treatments for cancer. And with the help of their donors, they will continue that research now and into the new year. This research brings hope to cancer patients around the world.

Before the mail was sent, donors with emails on file received an email telling them to be on the lookout for the appeal coming in the mail. On Monday before Thanksgiving – a few days after the mail arrived in house – these same donors received the first actual e-solicitation. The messaging mirrored the letter and asked donors to make their gift if they had not already done so.

The week before Christmas, donors received a follow-up solicitation, again reiterating the message of hope. This email was an abbreviated version of the first e-solicitation.

Then, during the week of New Years, donors received quick e-solicitations with a short message about year-end giving. The emails were sent on the Monday, Wednesday and Thursday prior to New Year’s Day, with similar messaging but different copy.

Increased revenue to the year-end program by $11,325 or 35% more revenue.
90% of online revenue from the year-end emails came during the last two weeks of the year.

Where are all the good donors?

We’re finding them. But we’re looking hard for them and that hard work is paying off for many of our clients. Here’s one example…

The list universe of prospective donors from nonprofit list owners has been declining for some time, and added to that, most of the list owners withhold the names and addresses of their better donors (some do not rent or exchange donors of $50 or more, some might go up to $99 but will restrict you from the $100 or more donors).

The point is… if you want to find households willing and able to give YOU $100 or more, you’re not going to find many of them from the traditional donor response lists.

First, you need to maximize the use of response lists and cooperative lists of responsive donor households such as the Target List Co-op. They’ve increased the upper limit on whom you’re able to rent/exchange.

Second, understand which lists produce the higher average gifts so they can be evaluated for mailing a second time.

But most important for finding new opportunities… we follow the money. We work with our modeling partners to identify households not found from traditional list sources that are above average in wealth.

Does this really matter?

Here’s an example of a recent new donor prospecting campaign that generated about 5,000 new donors and $240,000 in gross income… that equates to an average initial gift of $48. How did they do that?

We’re talking about prospects here, not long-standing loyal donors. So you’re not going to see the 80/20 rule apply to their giving. Being able to inspire 15% of your new friends to generate more than 50% of your new income (50/15) is a good benchmark.

Renewing the income attributed to the higher-level new donors will be more reliable and you’ll enjoy a higher ROI from the entire investment in new donors.

These 5,000 new donors will generate a lot of subsequent giving for this client, especially because of these 700 new friends at $100+.

Why do we know this? Look at what happened this year from the total yield of new donors from the year before… 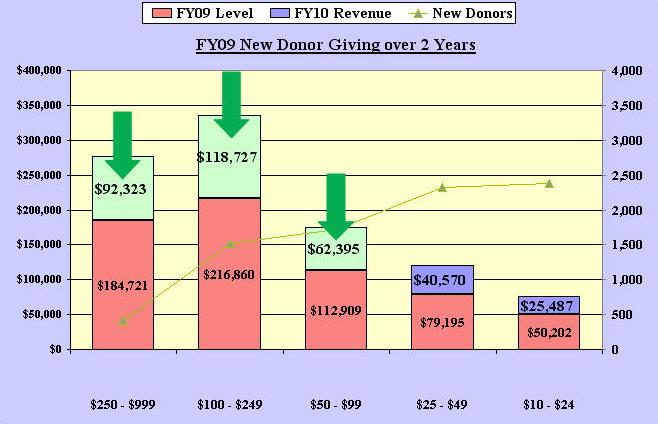 And this is what prospecting for new donors is all about… finding donors who will help again and again… at significant levels of annual support.