Some stocking stuffers for you

1. I get a LOT of questions from people worried that their thank you letters might not be right. We created this table as a reminder of whom to thank and how to thank them. The money granted to you from a donor advised fund (DAF) giving account was the charitable sponsor’s money, not your donor’s money anymore. The DAF donor should be thanked and should be told how much money you received, when you received it, and where it came from (use the popular name of the charitable sponsor like Fidelity Charitable). If you do all of that, you earn an A+.

2. DAF donors are not all alike. You should consider the following information, as it indicates how much they needed to donate to open a giving account with the charitable sponsor they chose; and it indicates what represents the minimum size grant they are allowed to recommend. 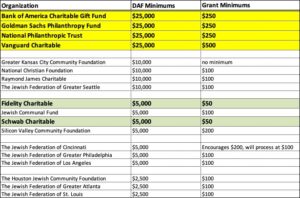